Franklin, Tennessee in Williamson County is what you might call an award-winning town. Over the last few years, it has received numerous accolades from dozens of publications, such as “Best Southern Town,” “Best Place to Live,” “Top Place to Retire,” “Top Community for Job Growth,” and “Top City to Start a Small Business.” Once the site of an important Civil War battle, Franklin is now one of Metro Nashville’s most popular places to live, work, and play, and it does an excellent job of blending the past with the present.

Many people who work in Nashville, which is just 20 miles north via Interstate 65, choose to commute to and from Franklin to take advantage of the fact that it still feels like a small town despite seeing extreme growth over the last few decades. However, more and more people are choosing to skip the commute in favor of jobs at top Franklin employers like CoolSprings Galleria, Community Health Systems, Williamson Medical Center, Nissan, Verizon, and Optum. 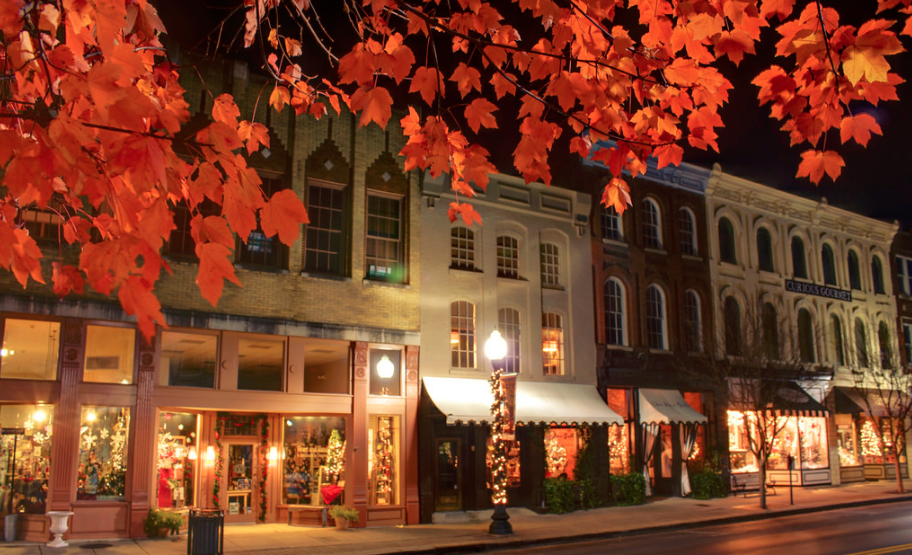 The picturesque city is often featured in movies, TV shows, and music videos, particularly the main square in Historic Downtown Franklin. Once named the “Most Romantic Main Street” in the country, residents takes great pride in preserving the area’s history and architecture. Franklin is also a community-oriented city. Throughout the year, residents and visitors can attend events like the Main Street Festival, Dickens of a Christmas, Pumpkinfest, and Wine Down Main Street.

Franklin officially dates back to 1799 when a state senator named Abram Maury Jr. founded the city and named it after Benjamin Franklin. However, Scottish immigrant Ewen Cameron actually built the first house here in 1768. Both Maury and Cameron are buried in Franklin today. By the time the Civil War rolled around, the city was the site of a major battle, the “Battle of Franklin,” that ended with 10,000 casualties. The war left the city worn down, and for many years it remained a largely rural farming community. When the 1980s rolled around, Franklin begin to grow at unbelievable rates. Over the next three decades, the population grew to over five times what it was in 1980, and it continues to expand. As of 2012, it is the seventh-largest city in Tennessee.

Because of its history as a Civil War battleground, people travel to Franklin from all over the country each year, and there is so much for them to see and do. Antique shops are plentiful in the downtown area, as are locally-owned boutiques. Spend a day shopping at stores like Early’s Honey Stand, Bink’s Outfitters, Handy Hardware, Main Street Toy Shoppe, and dozens of other unique places. You will also find a nice selection of locally-owned restaurants in town that serve barbecue, Southern comfort food, deli sandwiches, Thai food, pizza, Mediterranean cuisine, baked goods, and more.

Franklin is also home to the largest mall in Middle Tennessee, CoolSprings Galleria, which features over 1 million square feet of retail space and is home to stores like American Girl, Ann Taylor, Pottery Barn, Apple, and Williams-Sonoma. Of course, you cannot come to the Nashville area without seeing live music, and in Franklin you can take part in the weekly live two-hour radio show Music City Roots, Live from The Factory. The open mic night at Puckett’s is also sure to have you dancing. Other favorite destinations in Franklin include the award-winning Arrington Vineyards; the historic Carnton Plantation, which served as a large field hospital during the Civil War; and the historic Carter House that dates back to 1830.

Franklin boasts 16 parks that sit on over 700 acres, including historic sites and both active and passive facilities. Some local favorite playgrounds are located at Aspen Grove, Del Rio, Fieldstone, Jim Warren, Liberty, and Pinkerton Parks. Liberty

Park also features a 1-acre dog park where your furry family members can get some exercise. The city runs baseball, football, and cheerleading programs for young children who can play on the athletic fields at Jim Warren, Liberty, and Fieldstone Parks. Other park amenities that you can find throughout the city include walking trails, picnic areas, disc golf, tennis and basketball courts, fishing spots, skateboarding areas, and rentable pavilions.

In Franklin, you will find a unique blend of real estate options to suit all budgets and tastes. From country estates to two-story brick traditional homes to historic cottages, there is truly something for everyone. The median home price is just under $500,000, but there are homes in Franklin as low as $100,000 up to well over $1 million. Because Franklin experienced most of its growth over the last few decades, you will find many newer homes in family-friendly swim and tennis communities. Closer to the town square you will find more historic homes with charming detail built during the first half of the 20th century, along with established neighborhoods with mid-century ranch-style homes. You will also find some farmland with historic farmhouses and newly-built estates throughout town.

Some of the most popular neighborhoods include Westhaven, Fieldstone Farms, Mckays Mill, Ladd Park, Sullivan Farms, and Forrest Crossing.