The South Nashville neighborhood of Green Hills feels more like a suburban town than a community in a major American city, but for residents, that is part of the appeal. Schools, grocery stores, entertainment venues, businesses, and shopping and dining are all just a 5-minute drive away from every home in the neighborhood that boasts some of Nashville’s most sought-after residences.

Green Hills is the perfect spot for those who work in Downtown Nashville to call home, because the commute is nearly non-existent. Interstate 440 forms the northern border of Green Hills, which also makes for an easy drive into other parts of the city. However, many residents skip the commute altogether and take advantage of opportunities in their own backyard. Lipscomb University is located in Green Hills, and both Belmont and Vanderbilt Universities are just minutes away. For this reason, many students and staff members choose to live in the neighborhood.

Many people also come to Green Hills for entertainment. It is home to Nashville’s most upscale shopping destinations, as well as one of the city’s most famous venues for music, The Bluebird Café.

The Green Hills neighborhood was established in the 1930s, but after World War II, it began to see an influx of new residents and grow into the affluent community that it is today. During the 1950s and 1960s, there was some talk of incorporating Green Hills into its own town, but those plans fell through. 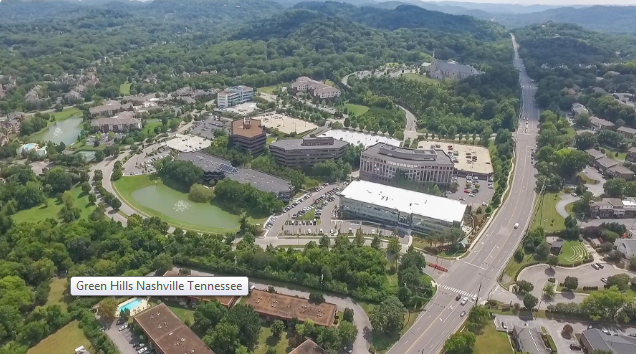 Green Hills has a reputation for its shopping, particularly when it comes to upscale designers and brand names. The Mall at Green Hills is home to stores like Apple, Louis Vuitton, Kate Spade, Sephora, Tiffany & Co., Coach, Burberry, and Tory Burch. The Hill Center shopping center is home to stores like Whole Foods, Anthropologie, and Lululemon Athletica, as well as smaller, locally-owned boutiques.

Restaurants are plentiful in Green Hills. It is home to some of your favorite chains like California Pizza Kitchen, Cheesecake Factory, and Sweet CeCe’s, as well as some of Nashville’s top local favorites. The Firefly Grille is a popular yet eclectic dining spot, and its chef even appeared on the Food Network program Chopped. The Crow’s Nest is a great hangout for happy hour or to catch a Titans game on Sunday afternoon, or you can head to Joe’s Place, which is open late and calls itself the “Green Hills Neighborhood Pub.” For breakfast or lunch try Noshville, an authentic New York delicatessen that is annually voted as the best deli in the city by Nashville Scene readers.

Green Hills is also home to one of Nashville’s most famous landmarks, the Bluebird Café. It is a must-visit for anyone who loves live music, and it is where artists like Garth Brooks were discovered. On any given night, performers range from up-and-coming songwriters to some of Nashville’s biggest stars of the music industry.

Green Hills has its own YMCA that is open daily and offers a swimming pool, childcare, youth programs, wellness programs, tennis courts, and much more.

Some small parks and green spaces are scattered throughout Green Hills, where you will find walking and jogging tracks, grassy lawns, and small play areas. Just north of the neighborhood is the McCabe Golf Course, a public course that dates back to 1942, as well as a playground and two ballfields at McCabe Park.

The homes in Green Hills tend to sit on larger lots than those in other parts of the city, which makes the area desirable for those who are in search of big backyards but want to stay close to the city. You will find an assortment of ranch-style homes here that were built between the 1940s and 1960s, as well as popular styles found in cities throughout the South, like Greek revival, cottage and traditional. New construction is also scattered through the neighborhood’s peaceful, tree-lined streets, and some condominiums are available. The average sales price is around $495,000 for a home in this established neighborhood.